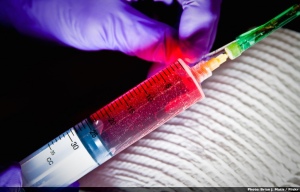 Sometimes I think about the things that brought me here.

I’ve been introduced recently to someone who is newly diagnosed. She is starting chemotherapy soon. She is getting a drug called adriamycin, as I did. Adriamycin is known in some circles as “red devil.” At the time I was told about my drug regimen, I was unaware of adriamycin’s reputation.

It is so potent and so dangerous that it can only be administered by a nurse wearing a full nasty-stuff getup: mask, apron, gloves. When a patient gets it, he or she must chew on ice chips, lest they break out with nasty mouth sores.

At that time, I was not in a good place, emotionally. I think I might have had post-traumatic stress. So when I heard my new friend’s news, I was briefly brought back to that time. I started to feel anxious, stressed-out. I was wondering if I was headed back down that spiral. I was legitimately afraid.

I snapped out of it, and now, I have to say, I feel pretty grateful. I saw my oncologist again yesterday and the news continues to be good.

I am no longer on Tamoxifen, the side effects of which were a problem the first time around. Instead, I’ve been switched to Anastrazole, which I only have to take once a day.

It’s more powerful and only for patients who are post-menopausal… which, having had my ovaries removed, includes me. I managed to avoid symptoms on Tamoxifen, but I’m starting to get hot flashes after only a day on the new drug.

Because there has probably been damage to my bones, my doctor also wants to start me on an IV osteoporosis drug. I’ll have to go in quarterly for a two-hour-or-so infusion.

I am just so lucky that I’m not facing more chemo. I think of my new friend and hope she makes it through okay.